An interesting source for the study of Welsh history** before 1830 are the Court of Great Sessions records held at the National Library of Wales (NLW). From 1543 until 1830 Wales had its own legal jurisdiction covering criminal, civil and Chancery cases. It’s the criminal side this post concentrates on. 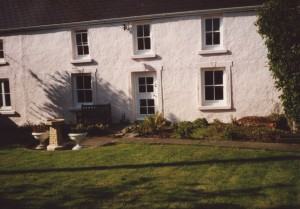 The Court’s criminal jurisdiction was similar to that of the Assize courts in England. Using the surviving records it’s possible to analyse the history of crime in Wales and, to help local and family historians get started, NLW has created an on-line database of cases heard in Wales between 1730 and 1830. One of the classes of documents referenced on the database are coroners’ reports. According to Parry, the coroner was “obliged by statute to go the place where any person was found slain or suddenly dead and was required by to summon a jury of local men to view the body…and to examine witnesses and suspects…”

It appears, from comparing another source, that all coroners’ reports have survived for the local mining parishes around Saundersfoot for the period between 1786 and 1820. Thereafter until the abolition of the Court in 1830, the survival rate is about half.***

What do these reports contain? The various coroners were not consistent in the information they recorded. In the late 1700s the then coroner was particular about recording all the types of data shown in the following table. His successor in the early 1800s was less so.

I have posted a list of coroners’ reports for the local mining parishes (including Amroth, Jeffreyston and Loveston) for the 1786-1830 period. The list includes the circumstances of death, the name of the deceased and the parish where the inquest was held. There is obvious value in this data for family historians. For example, anyone researching the Ollin mining family from around Wooden will find their ancestor, John Ollin, in the list. He died in a mining accident in St Issells in 1828.

For local historians the value is equally obvious. I  used this source in a previous post to describe the problem of uncapped pits in the area. Among the many industrial-related accidents, several men fell from wagons moving coal to, and also on, Saundersfoot beach for shipping. With a long shoreline it is no surprise that others drowned in the sea walking along the coast or in boating accidents. These records provide a few snippets of their history.

A Guide to the Records of the Court of Great Sessions in Wales, Glyn Parry, National Library of Wales, 1995

8 thoughts on “Sudden Or Unexplained Deaths”